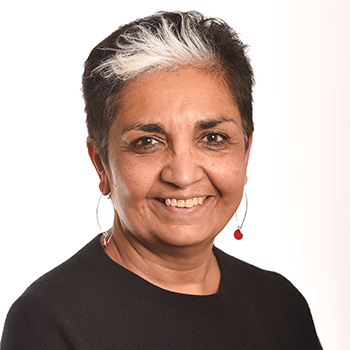 Arvinda Gohil is Chief Executive of Central YMCA, the first ever YMCA set up in 1844. Central YMCA provides programmes and support across England in education, training, health, and wellbeing. She was previously Chief Executive of Community Links, a social action and advocacy charity based in East London. She has worked in the not-for-profit and charitable sector all of her working life, including as Chief Executive of Emmaus UK. Prior to this, she ran her own consultancy for five years, specialising in governance, leadership, and equalities.

Previous roles include Membership Services Director at the National Housing Federation; Assistant Director for Regulation at the Housing Corporation; and Chief Executive of two Black-led housing associations - Unity where she was a founder, and Inquilab. Her career started in housing and her first role was running a women’s refuge specifically to support Black and Asian women. Arvinda has also worked in South Africa where she assisted in developing a social housing model.

As an experienced non-executive, Arvinda is currently Chair of The Peel, a charity that has been building a connected community in Clerkenwell since 1898. She is also a non-executive director of the Conduit, where she chairs the Impact Committee.

Back to who we are page